A team of Imperial students are hoping to make avoidable blindness a thing of the past with a revolutionary imaging tool.

VUI Diagnostics, founded by Imperial medical students Simon Rabinowicz and Uddhav Vaghela, won the Venture Catalyst Challenge 2019 for their invention, which could dramatically speed up the diagnosis of diseases that lead to sight loss. 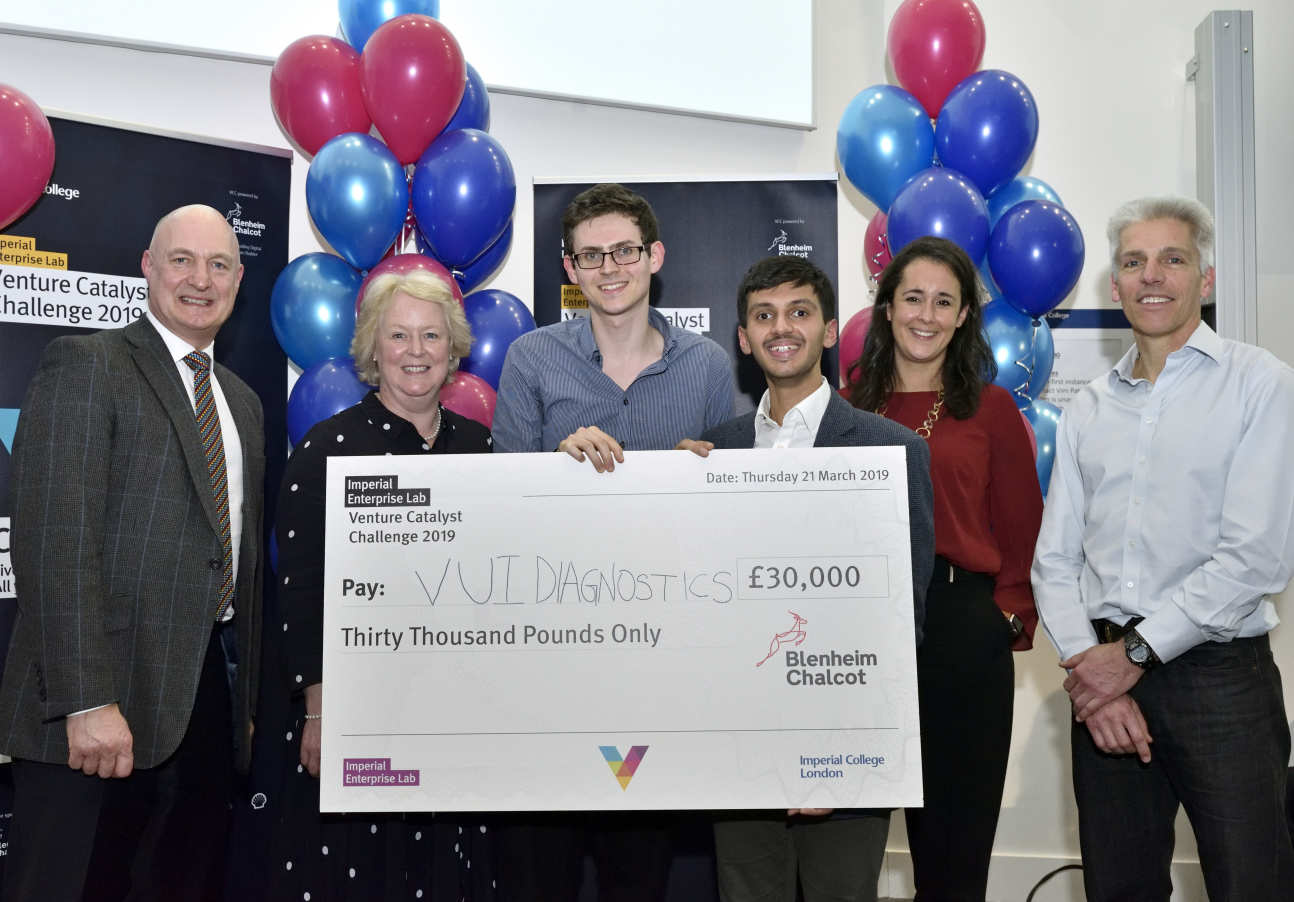 The Venture Catalyst Challenge (VCC), which is run by Imperial Enterprise Lab and powered by Blenheim Chalcot, is the College’s biggest entrepreneurial competition for students. It challenges them to turn their ideas into new technologies, products and businesses

The team took home the £30,000 top prize after battling it out against five other startups at the final on Thursday 21 March, as well as the Audience Vote award which will allow them to spend time with Blenheim Chalcot partners and meet with investors.

The final was held during Enterprise Month 2019, four weeks full of showcases, competitions and exhibitions, highlighting the best of student innovation and entrepreneurship from across the College.

Imperial plays a central role in addressing today’s global challenges, and our bright and energetic students are vital to this mission

Ben Mumby Croft, Director of Imperial Enterprise Lab, said: “This year’s VCC competition has been our biggest and best yet and is testament to the extraordinary reserves of entrepreneurial talent among Imperial’s diverse student community. At Enterprise Lab we passionately believe that entrepreneurship is more than just a one-off event and we’re now looking forward to working with all of the VCC teams over the coming weeks and months to help them push ahead and develop their ideas further.”

Professor Alice Gast, President of Imperial College London said: “Imperial plays a central role in addressing today’s global challenges, and our bright and energetic students are vital to this mission. Students need the freedom to pursue ideas, the mentorship to guide their explorations and the spaces to work on their development, and the funding to develop them into successful ventures. The Venture Catalyst Challenge offers just that.”

According to the WHO, about 80% of global blindness is avoidable. Imaging the retina can diagnose over 50 eye and whole body diseases - including glaucoma and diabetes – but current tools are underused due to being slow, inaccurate and high cost. 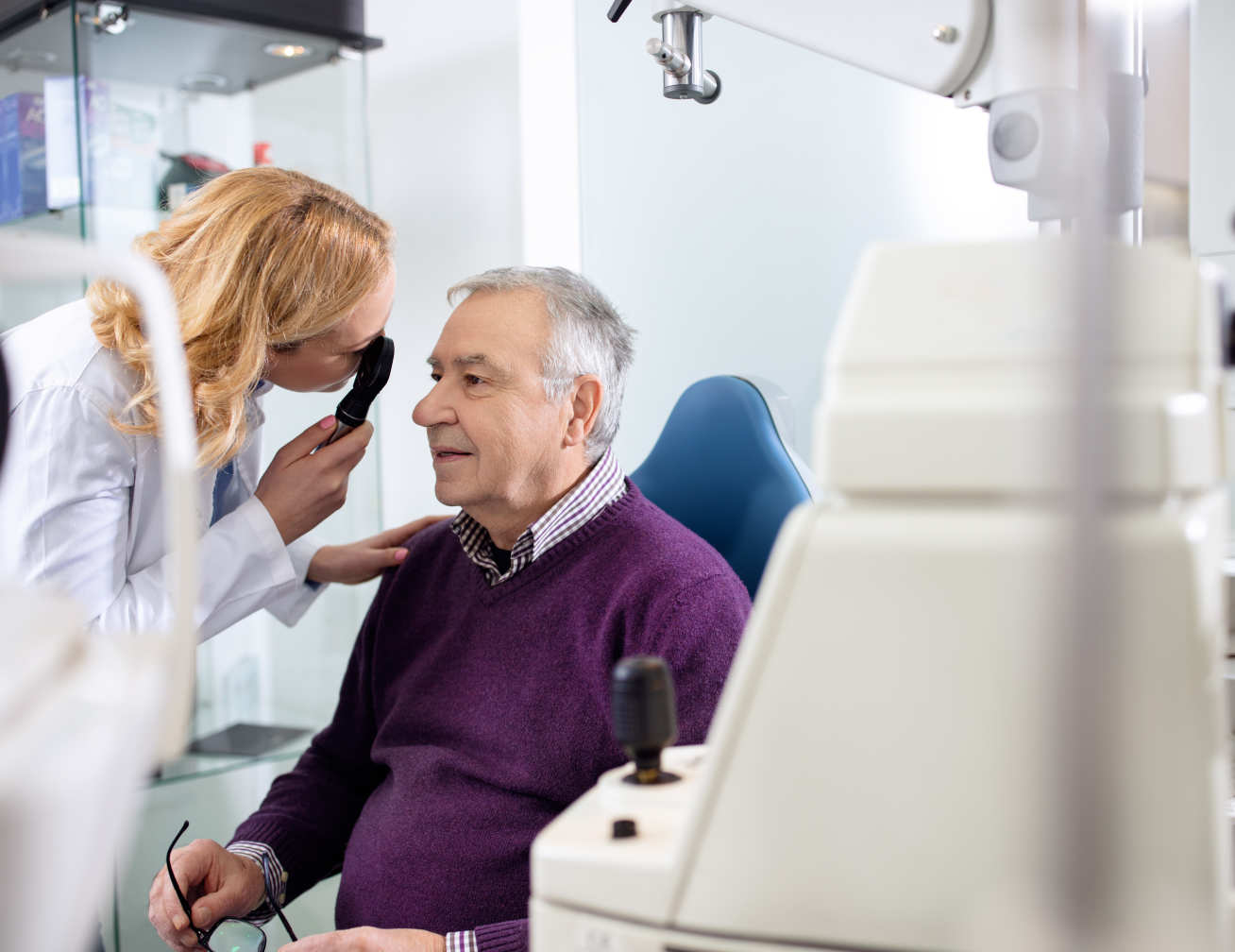 The VUI Diagnostics team say that ophthalmoscopes –used for examining the inside of a patient’s eye – are complicated to use and have a narrow field of view, meaning it is slow and difficult to get an adequate view of all parts of the eye. Many clinicians lack confidence in using the device, the team claim.

Their solution is a simple, affordable, and accurate plug-and-play retinal imaging tool that can connect to a smartphone or laptop via Bluetooth. They say that their tool is considerably faster than ophthalmoscopy, and can image ten times more of the eye – allowing for greater accuracy.

The device is so easy to use that it could be operated even by those without clinical training, the team say, and is considerably cheaper than current tools. With 90% of the world's blind living in the developing world, they could bring retinal imaging to isolated regions that previously did not have access to such technology.

VUI Diagnostics, who are hoping to commence clinical trials later this year, team developed their prototype with the support of Imperial College Advanced Hackspace.

The team say: “We want to make avoidable blindness a thing of the past for everyone, everywhere”

This year the VCC was bigger than ever before, with more than £80,000 of funding up for grabs. For the first time, the competition was split into five themes, with the winner of each track claiming also claiming £10,000. VUI Diagnostics won the Health & Wellbeing track, sponsored by P&G Ventures. Other winners were:

Capta, founded by postgraduate students Laura Braun (Civil and Environmental Engineering) and Kai Riemer (Bioengineering) who are developing a low-cost, handheld microscope that can connect to smart devices to facilitate earlier diagnosis of parasitic worms.

Also pitching on the night was 'Wildcard' entrant Mind2Matter, founded by Alex McKeeman and Shaan Bassi from the Department of Life Sciences, a startup developing sensors that can understand a person’s emotions.

"Their solution is a simple, affordable, and accurate plug-and-play retinal imaging tool that can connect to a smartphone or laptop via Bluetooth."

This seems a good idea - I wonder what the tool looks like?

A mother and son's photographic journey through dementia

How do we save ageing Australians from the heat? Greening our cities is a good start
×