Researchers have found no link between exposure to emissions from municipal waste incinerators (MWIs) and infant deaths or reduced foetal growth.

However, they show living closer to the incinerators themselves is associated with a very small increase in the risk of some birth defects, compared to the general population.

But whether this is directly related to the incinerator or not remains unclear.

The findings come from the largest and most comprehensive analysis to date of the effects of municipal waste incinerators (MWIs) on public health in the UK.

"The findings on birth defects are inconclusive, but our study design means we cannot rule out that living closer to an incinerator in itself may slightly increase the risk of some specific defects." Professor Paul Elliott, Imperial College London

MWIs are used to burn waste that is not recycled, composted or sent to landfill and can include materials such as paper, plastic, wood and metal.

While MWI emissions are governed by EU regulations, public concern remains around their potential impact on public health and scientific studies to date have been inconsistent or inconclusive.

The analysis, led by a team at Imperial College London and funded by Public Health England and the Scottish Government, looked at MWIs at 22 sites across the UK between 2003 and 2010.

Researchers from the UK Small Area Health Statistics Unit (SAHSU) at Imperial first analysed concentrations of fine particles called PM10 (particulate matter measuring 10 micrometres or less in diameter) emitted from the chimneys of the incinerators as waste is burned.

Computer models generated from the data showed how these particles spread over a 10 km radius around 22 MWIs in England, Scotland and Wales.

The models show that MWIs added very little to the existing background levels of PM10 at ground level – with existing PM10 concentrations at ground level on average 100 to 10,000 times higher than levels emitted by the chimneys (Environment Science & Technology, 2017).

Using these models, the team then investigated potential links between concentrations of PM10 emitted by MWIs and any increased risk of adverse birth outcomes.

In an earlier study (Environment International, 2018), they found that analysis of records covering more than one million births in England, Scotland and Wales revealed no evidence of a link between small particles emitted by the incinerators and adverse birth outcomes such as effects on birthweight, premature birth, infant death, or stillbirth, for children born within 10 km of MWIs in Great Britain.

We found a small increase in risk for children living within 10km of an MWI being born with a heart defect, or a genital anomaly affecting boysProfessor Mireille ToledanoImperial College London

The team’s latest findings, published in the journal Environment International, looked at occurrence of birth defects within 10 km of a subset of 10 incinerators in England and Scotland between 2003 and 2010.

In their analysis, the team used health data on more than 5000 cases of birth defects among over 200,000 births, still births and terminations in England and Scotland.

They found no association between birth defects and the modelled concentrations of PM10 emitted by MWIs, but there was a small increase in the risk of two birth defects among those living closer to MWIs – specifically congenital heart defects and hypospadias (affecting the male genitalia – where the opening of the urethra is not at the top of the penis). These birth defects typically require surgery but are rarely life-threatening. 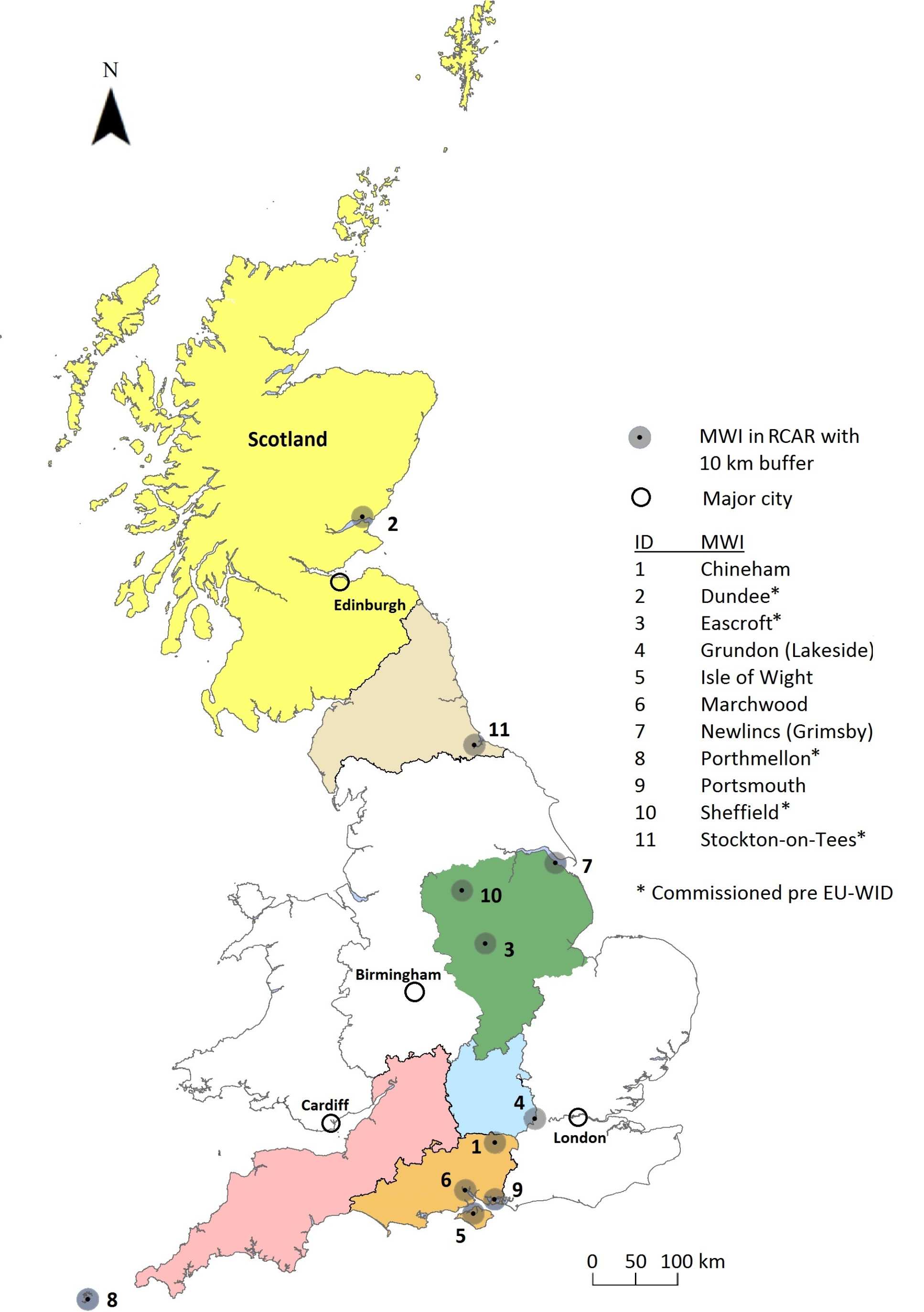 The team’s latest findings looked at occurrence of birth defects within 10 km of a subset of 10 incinerators in England and Scotland between 2003 and 2010. Grundon (Lakeside) was excluded due to insufficient data on birth outcomes. (Credit: Parkes et al. 2019)

Professor Paul Elliott, Director of the UK Small Area Health Statistics Unit (SAHSU) said: “Based on the available data, our findings showing that there is no significant increased risk of infant death, stillbirth, preterm birth or effects on birthweight from municipal waste incinerators are reassuring.

"The findings on birth defects are inconclusive, but our study design means we cannot rule out that living closer to an incinerator in itself may slightly increase the risk of some specific defects – although the reasons for this are unclear.”

Professor Mireille Toledano, Chair in Perinatal and Paediatric Environmental Epidemiology at Imperial, said: “In these studies we found a small increase in risk for children living within 10 km of an MWI being born with a heart defect, or a genital anomaly affecting boys, but did not find an association with the very low levels of particulates emitted. 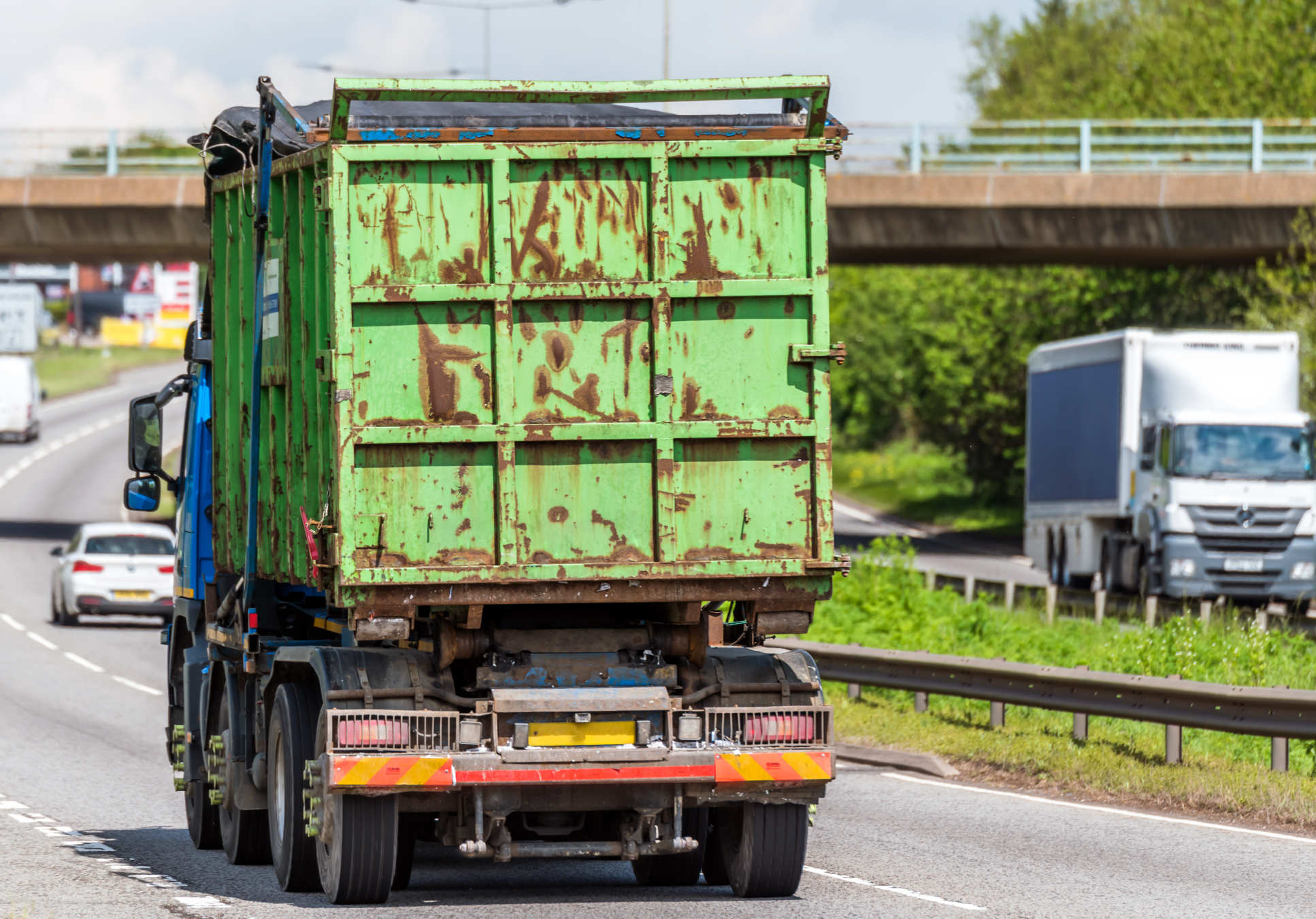 The researchers explain they cannot rule out a link between the increased incidence of the birth defects and the activities of the MWIs, such as increased industrial road traffic or other pollutants. (Credit: Shutterstock)

"This increase with proximity to an incinerator may not be related directly to emissions from the MWIs. It is important to consider other potential factors such as the increased pollution from industrial traffic in the areas around MWIs or the specific population mix that lives in those areas.”

Professor Anna Hansell, Director of the Centre for Environmental Health and Sustainability at the University of Leicester, who previously led the work while at Imperial College London, added: “Taken together, this large body of work reinforces the current advice from Public Health England – that while it’s not possible to rule out all impacts on public health, modern and well-regulated incinerators are likely to have a very small, or even undetectable, impact on people living nearby.”

"While it’s not possible to rule out all impacts on public health, modern and well-regulated incinerators are likely to have a very small, or even undetectable, impact on people living nearby." Professor Anna Hansell, University of Leicester

The team explains that while the results of the emissions studies are reassuring, they cannot rule out a link between the increased incidence of the two birth defects and the activities of the MWIs.

They add that while they adjusted their results for socioeconomic and ethnic status, these may still influence birth outcomes findings. Poorer families may be living closer to MWIs due to lower housing or living costs in industrial areas, and their exposure to industrial road traffic or other pollutants may be increased.

The researchers highlight that their findings are limited by a number of factors. Also, they did not have measurements (for the hundreds of thousands of individual births considered) of metals or chemical compounds such as polychlorinated biphenyls (PCBs) and dioxins, but used PM10 concentrations as a proxy for exposure to MWI emissions – as has been used in other incinerator studies.

They add that ongoing review of evidence is needed to explore links further, as well as ongoing surveillance of incinerators in the UK to monitor any potential long-term impacts on public health.

The research was funded by Public Health England and the Scottish Government, with support from the Medical Research Council and the National Institute for Health Research.