The world's population is aging while many countries' birth rates fail to keep up.

There are now more people over the age of 65 than there are under the age of five - a dispersion that's never occurred before, according to Deutsche Bank. 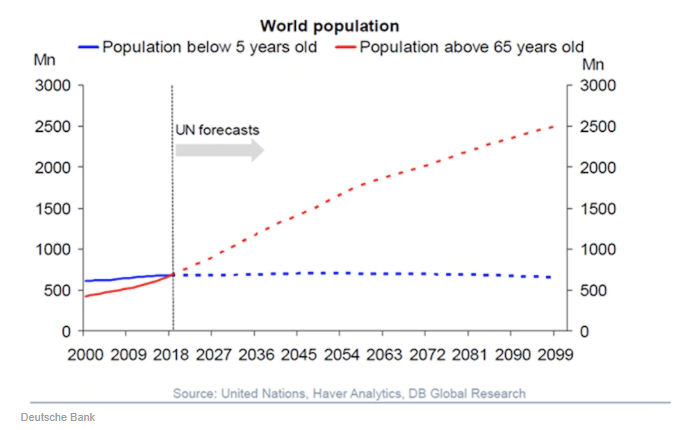 The data point is part of a broader trend with widespread consequences for productivity, inflation, and global growth, economists say.

The world's population isn't getting any younger. In fact, it's getting much, much older. And that has sweeping implications for global growth, economists contend.

There are now more people on Earth older than 65 than younger than five for the first time, according to a Deutsche Bank analysis of United Nations data, Haver Analytics data, and the firm's global research.

The extreme data point underscores a broader economic trend that some economists are warning clients about: declining fertility rates lead to an aging population, which is thought to usher in depressed productivity, labor-force participation, and stagnant inflation. More indirect results of declining birth rates may also have an impact on macroeconomic factors like homeownership.

The chart below, from Torsten Sløk, Deutsche Bank's chief international economist, shows the world population of those under the age of five and those older than 65. While the under-five population has held relatively steady for the last two decades, the above-65 population has only risen.

"The key issue for investors in equities, rates, and credit is if the global economy is able to generate enough productivity growth to offset these demographic trends," Sløk wrote to clients Tuesday. "And for [foreign exchange] the question is which parts of the world will be hit harder than others by a demographic slowdown in growth."

Sløk cited "secular stagnation," which is the Larry Summers-endorsed theory to which this pattern is connected.

It's known as a condition wherein savings rise and investment slows, causing economic growth to stall out. Summers, the former Clinton-era Treasury secretary and Obama-era National Economic Council director, has argued the condition may be the "defining macro-economic challenge of our times."

Generally, fertility rates around the world have fallen below "replacement" levels, or below the level that can support population growth, said Ed Yardeni, president of Yardeni Research. And that "baby bust" is weighing on global growth.

Yardeni - who has long written about the economic impact of an aging population, particularly in China - said the US has a fertility rate slightly below replacement.

"Our fertility is right around replacement," Yardeni told Markets Insider in an interview on Tuesday. "So we're not as advanced in the birth dearth and on this kind of road to self-extinction as Japan is, and China, and some other countries."

Wall Street is taking note of the broader "stagnation" theme associated with an aging population. For a second straight month, the theme dominated Bank of America Merrill Lynch's Global Fund Manager survey, which takes the pulse of how big-money managers view global markets and economies.

Here's a chart from the firm showing features of what the firm calls the "return" of secular stagnation - 55% of investors surveyed now see both below-trend growth and below-trend inflation over the next year. 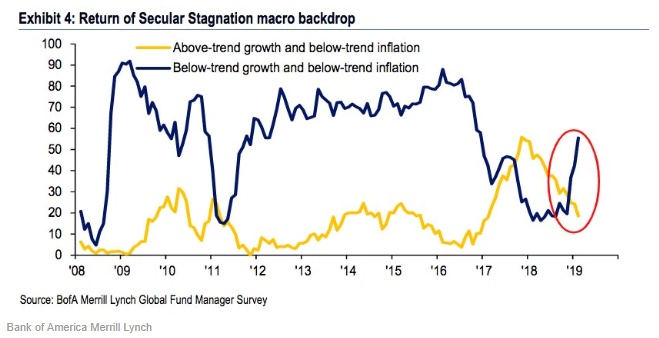 To be sure, others contend there is no clear negative association between an aging population and declining growth.

A 2017 paper by Daron Acemoglu, a Massachusetts Institute of Technology economist, and Pascual Restrepo, an assistant professor at Boston University, found that contrary to the themes and concepts Summers and others have popularized, there is "no negative relationship between between population aging and slower growth of GDP per capita."

In a counterintuitive result, they found that countries undergoing rapid aging have grown more in recent decades, likely reflecting a faster adoption of labor-replacing technologies and automation.

The paper concluded: "There is a clear need for future work that systematically investigates the relationship between demographic change and GDP growth as well as the channels via which this relationship works."